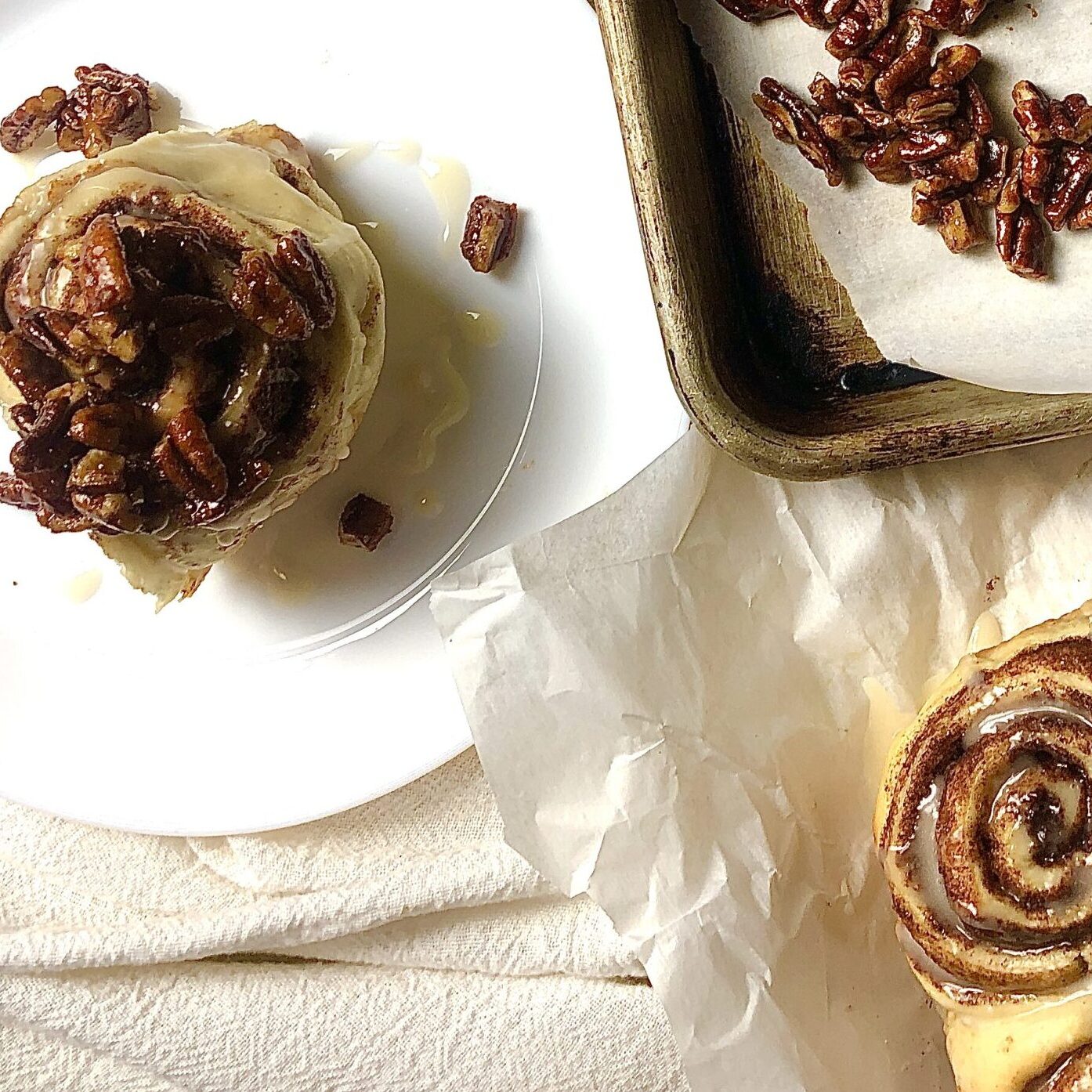 Cinnabon, move over! There’s a new cinnamon roll master in town… YOU! Yes, I know baking, in general, and baking that involves yeast, in particular, can be intimidating, but I’ve got you! This recipe simplifies all the things that could potentially freak you out about making cinnamon rolls at home. Did I mention that you can have the cinnamon rolls warm and fresh out of the oven in less than an hour?! Cinnamon rolls are some of the most delicious sweet treats in existence, with their tender breading and gooey brown sugar-cinnamon filling. And now, you can enjoy them right at home with the added satisfaction of knowing that you did that.

Types of yeast and their benefits

Instant yeast: Called “instant” because it can and should be added directly to the dough without first hydrating with water. Treatment during production is gentler (than for active dry yeast) so less of the yeast is dead or damaged, the yeast is more vigorous, and therefore, it is easier to overproof doughs that use it. Instant yeast is best when fermentation time is short, like in this recipe.

Instant yeast, if unopened, will last up to one year at room temperature without losing its effectiveness. If it is opened, refrigerate for several months or more, or freeze.

Because of the harsh treatment during production, every pound of active dry yeast has about one-quarter pound of dead yeast. Since dead and damaged yeast releases a substance (glutathione) that is detrimental to the quality of gluten in the dough, active dry yeast is not popular with professional bakers. It tends to produce slack, sticky doughs, and dense loaves. But this same slack dough is beneficial in pizza and tortilla production.

Fresh compressed yeast: Comes as moist cakes or blocks that are 30% yeast and the rest moisture. It lasts up to two weeks when stored properly and refrigerated, and three to four months when frozen. The most common way to use compressed yeast is to first dissolve it in twice its weight of warm (100º F; 38º C) water.

While compressed yeast can be crumbled directly into the dough, this is not recommended, since it risks uneven distribution of yeast throughout the dough.

The process of making cinnamon rolls

Making cinnamon rolls can be broken down into four major steps. Let’s go through them now, just so you can see how simple it can be.

Step one. Mix together flour, sugar, salt, and instant yeast packet. Step two. Combine water, milk, and butter then heat in the microwave until the butter is melted, about 45 seconds. It will take longer if any of the three are cold or frozen. Step three. Combine the wet ingredients with the dry and add an egg.

Use a whisk or your clean hands to combine the dough into a loose ball of dough inside the bowl. Then empty the dough onto a clean, VERY lightly floured surface to continue kneading for 2-3 minutes. The dough should no longer be sticky when you’re finished kneading.

At this point, the dough needs to rest for 5-10 minutes so that it can rise and relax. A relaxed dough is much easier to roll out into the thin rectangle needed to make cinnamon rolls. If you go to shape dough and it springs back immediately, it likely hasn’t rested long enough.

Grease a clean bowl then place the kneaded dough in the bowl in a relatively warm place in the kitchen (on the back of the stove or in the microwave) to rest.

After resting, roll out the dough into a large rectangle, approximately 16 inches long by 9 inches wide.

The filling can be achieved by spreading out the butter on the dough first. Combine the brown sugar and cinnamon and sprinkle this all over the buttered dough.

Alternatively, the butter, brown sugar, and cinnamon can be mixed together and then spread out onto the dough.

Assembling and baking the cinnamon rolls

Starting with one of the shorter ends of the rectangle, tightly roll the dough into a log. To make 9 large cinnamon rolls, cut the log into 1-inch pieces. For smaller cinnamon rolls, the log can be cut into 12 equal pieces.

To prepare the pan for baking, parchment paper is a lifesaver. It can be cut into one large sheet to cover the bottom and up the sides or into two thick strips (less than the width of the sides) that reach underneath the rolls and up the sides to help lift the rolls up out of the pan. We prefer the two strips method because it allows some parts of the cinnamon roll to be in contact with the pan and create a delicious brown crust.

For the easiest glaze ever, whisk powdered sugar, vanilla extract, and milk together until it’s smooth. No lumps allowed. To avoid them, you can sift the powdered sugar into the bowl or just make sure to whisk it before adding the liquid.

To make cream cheese glaze, add 4 oz. of softened cream cheese and 4 Tablespoons of unsalted butter to a bowl. Cream together with a hand or stand mixer. Add 1-2 teaspoons of vanilla extract (optional), 2 cups powdered sugar, and 2-3 Tablespoons of milk or heavy cream, and continue to whisk until smooth and creamy.

Feel free to add lemon, lime, or orange zest to your glaze for a pop of fresh flavor. Also, other extracts such as almond, peppermint, and lavender can be used in the glaze to complement the filling, if you ever want to experiment with that. Be careful not to use too much though. They are strong and will overpower all the other delicious flavors in the cinnamon roll. Start with 1/4 teaspoon and taste, then add more only if you can’t taste it.

How to serve and store the cinnamon rolls

To serve: Let the cinnamon rolls cool for 1-2 minutes before topping with glaze. Top with additional toppings such as toasted or candied nuts, caramel drizzle, or fresh fruit.

To reheat in the oven (recommended): Cinnamon rolls (and other bread products that are best served warm) need a little sprinkle of water and an oven to reheat properly. Preheat an oven to 300º F. Sprinkle less than a teaspoon of water onto the cinnamon rolls and wrap loosely in aluminum foil. Turn off the oven and place the cinnamon rolls inside for 10-15 minutes to reheat. Add additional glaze after heating.

To reheat in the microwave: Wrap a slightly damp paper towel around the cinnamon roll(s) and heat for 20-30 seconds. Glaze after heating.

Top with the following:

To make these vegan, replace the whole milk with almond, oat, or coconut milk. Use an unsalted plant-based butter life Flora instead of unsalted dairy butter. The egg can be left out entirely, but make sure to increase the amount of milk by 4 Tablespoons. Alternatively, an egg-like compound can be whipped up out of ground flaxseed and water. Thoroughly mix 1 Tablespoon of ground flaxseed and 3 Tablespoons of water and let this sit before adding to the dough instead of the egg. 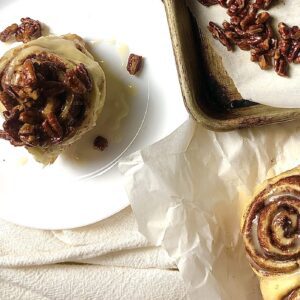 To make the dough

To fill and bake the cinnamon rolls

To make the glaze 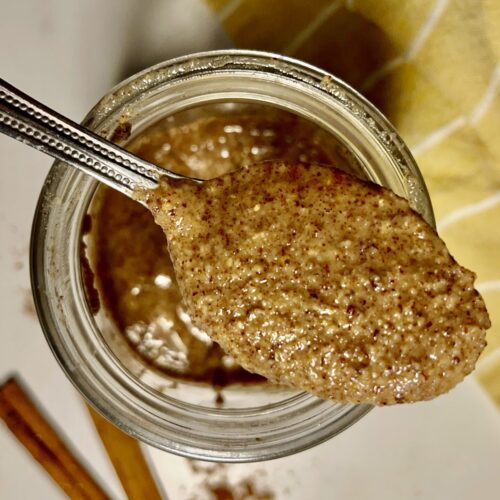 Summary This variation of the more popular peanut butter is for those of us who love pecans. Since pecans are naturally oily, they only need a little additional salt and some optional cinnamon for extra flavor to be turned into delicious nut butter and spread. […]

Summary Granola can be enjoyed by itself or as a topping and there are countless ways to make it – adding nuts, dried fruits, spices, and more to the traditional rolled oats base. Make yogurt bowls at home. Pair the granola with fresh fruit, jams, […] 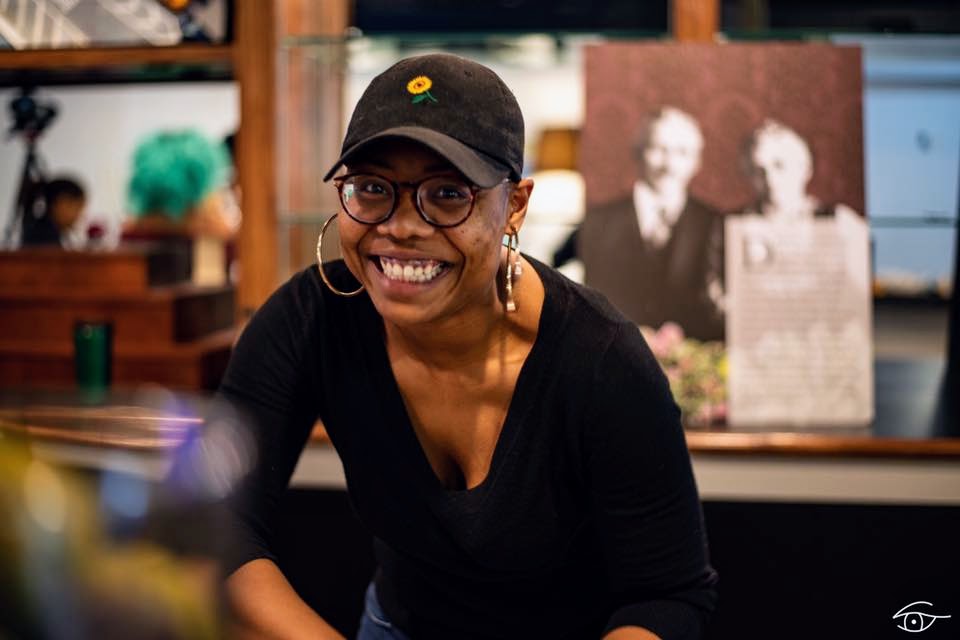