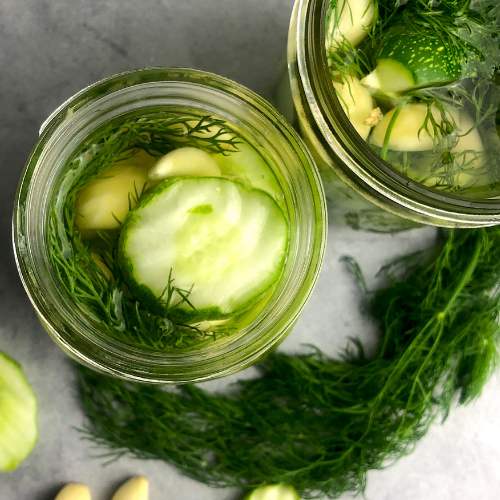 Pickles are both a delicious snack and an easy way to elevate a sandwich or burger. They are also incredibly simple to make. With just a handful of common ingredients and about 7 days of waiting time, you can make a jar of crunchy homemade pickles that will inspire you to make some of the most elaborate sandwiches you’ve ever made in your life! It’s a very quick process, so no more stalling. Let’s get into this.

What are pickling cucumbers?

Some cucumbers are best for enjoying fresh, sliced, in salads, and with dips. These are referred to as “slicing cucumbers” and they’re the longer cucumbers with thick, dark green, uniform skin that helps keep the slices intact.

Pickling cucumbers, on the other hand, are shorter with thinner skin and more spines. They also have drier flesh inside that allows them to soak up more of the pickling brine. Kirby cucumbers (the small ones with bumpy skin), Persian cucumbers (even smaller than Kirby cucumbers but not readily available in all markets), and English cucumbers (seedless) are considered good cucumbers for pickling.

Will other cucumbers work?

You can use any cucumbers to make your homemade pickles, but be just careful with using slicing cucumbers because the inside flesh is already moister and the pickling brine may cause them to break down and become mushy. If you’re using slicing cucumbers, consider using thicker slices to preserve some of the crunch that is desirable in pickles.

For more about the types of cucumbers: A Brief Guide to Types of Cucumbers | The Spruce Eats

Ways to adjust your homemade pickles

Other foods to try pickling

Because our base brine recipe is so simple and based on a ratio, it is easy to make, scale, and adjust based on the taste you’re going for. Try pickling any of the following fruits and vegetables.